The stream of false and manipulative claims about Covid-19 hasn’t decreased for weeks. Various participants are spreading false information on platforms such as Youtube and Facebook. A data analysis conducted by CORRECTIV.Faktencheck shows that Youtube is the platform most frequently reported by users for spreading questionable information. Around 46 percent of the links sent to us requesting a fact check lead to the video platform.

The result: the dissemination of false information can be huge within the shortest of timeframes. According to a recent survey conducted by Forsa and commissioned by the regional media office of North Rhine-Westphalia, 81 percent of people in Germany believe that they have already come across disinformation about the coronavirus on the internet.

The source of the evaluated data is CORRECTIV’s CrowdNewsroom, and they are not representative. Readers have been able to submit content that they consider to require a fact- check to the site that to require since mid-March. We have evaluated more than 1,800 reports over all. They are based on users’ subjective assessments which pieces of information could be false. Thus, not all of them are necessarily fake.

However, what the submissions clearly show is which posts about the coronavirus have made people uncertain or aroused their mistrust, and the way in which this information reaches them.

The platform: around 46 percent of the links lead to Youtube

Youtube’s particular importance becomes clear when you take a look at the platforms that appear most frequently in our data: An analysis of more than 1,400 links submitted to the CrowdNewsroom shows that 45.8 percent lead to videos on Youtube.

Second place goes to websites with 30.6 percent, followed by Facebook with 16.6 percent. As there is no way to create links to Whatsapp, the instant messenger cannot be included in this evaluation. 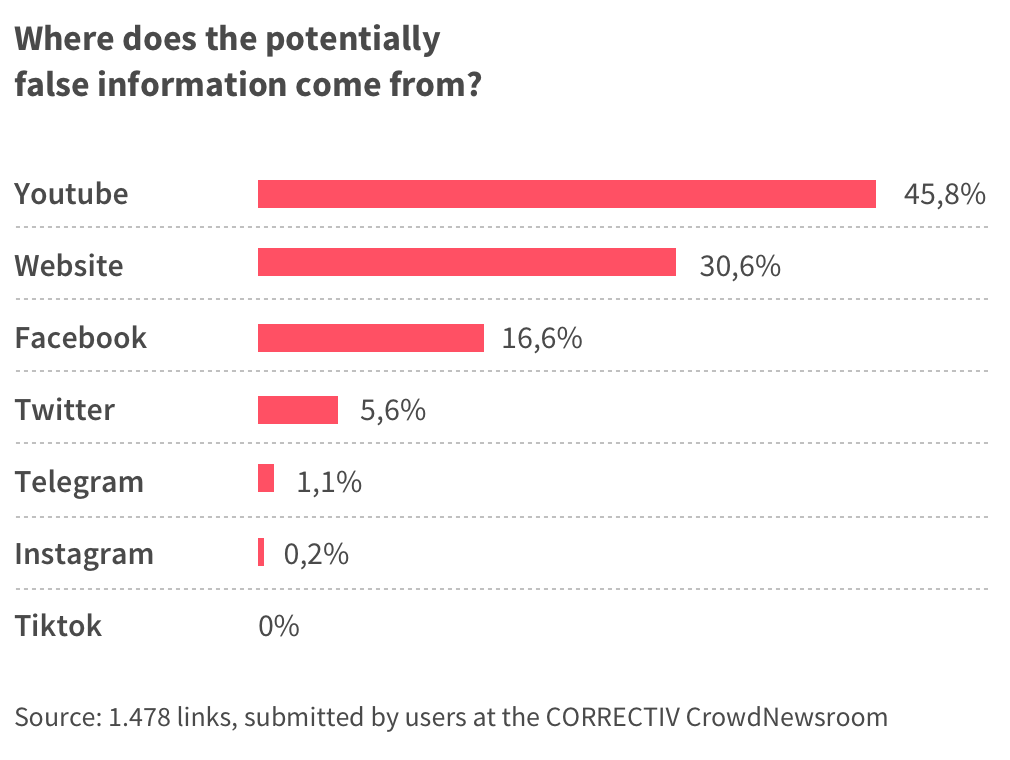 This means that by far the most frequent source of potentially false information reported to us by readers are Youtube videos.

The dissemination method: 34 percent state that they received the information via Whatsapp

When asked where they came across the information for the first time, 34 percent of users answered that it was Whatsapp. Facebook follows in second place with 28.8 percent. 14.2 percent of users indicated Youtube as their first contact, while 7.6 percent said it was websites.

Whatsapp is the way most people first come into contact with potentially false information – for example, because it was sent to them by family or friends. 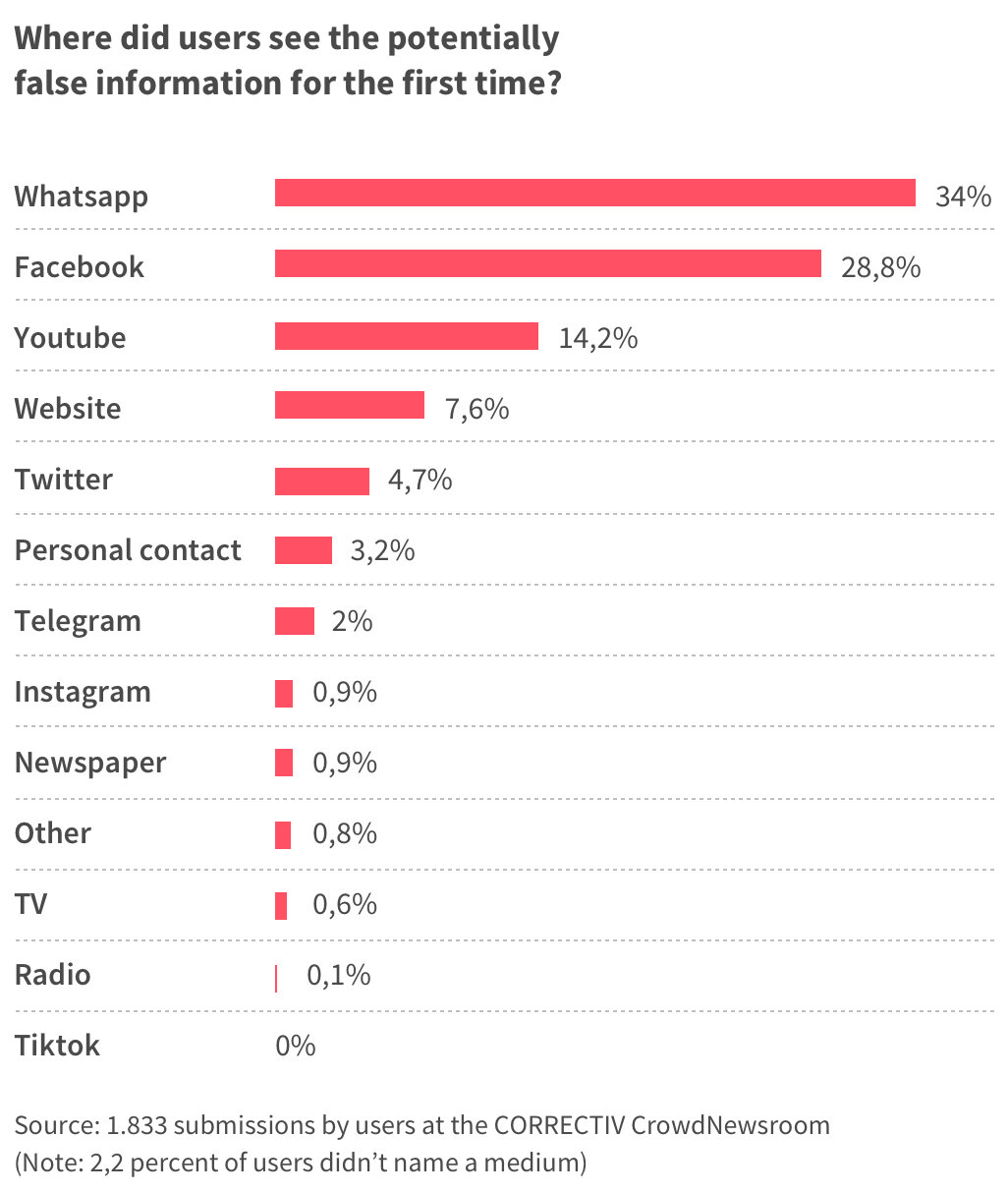 Thus, Whatsapp is the most common dissemination channel for questionable information – and Youtube is the place where it can be found.

The result of our data analysis reflects the great importance of these two platforms on the German market. According to an ARD-ZDF online survey (2019), 40 percent of the population as a whole access Youtube at least once a week. The video platform is particularly popular with younger internet users: 82 percent of people aged 14 to 29 visit it at least once a week.

But Whatsapp is even more widespread in Germany:  In 2019, 75 percent used the instant messenger at least once a week. In the case of people aged between 14 and 49, this figure even increases to more than 90 percent. Facebook is used by 31 percent of all people at least once a week.

The fact that false information on health issues is being disseminated over social networks is not new – but the corona crisis has aggravated the problem.

False reports about Covid-19 spread internationally. For example, Whatsapp messages claiming that you should always take your shoes off at your front door because the coronavirus adheres to them, were sent in Germany, Ireland, and Croatia. And the false claim that drinking a sip of water every 15 minutes prevents infection, circulated on Whatsapp in Germany and Spain and on Facebook in Lithuania, Croatia, and the Philippines.

Numerous doctors, including virologist Christian Drosten, recently asked large technology companies in an open letter to act against the “infodemic”. The operators of the platforms should “take immediate systemic action to stem the flow of health misinformation, and the public health crisis it has triggered”. The doctors also refer to cheap propaganda targeting the vaccinations against measles as an example of this.

“Once a piece of fake news gets into someone’s mind, it is anchored there in a relatively stable manner”

Sabrina Heike Kessler, of the Department of Communication and Media Research at the University of Zurich is a communication scientist specializing in science communication. She says: “The fact that people believe in fake news concerning health issues can also be explained by the human desire to be healthy, stay healthy, or to get well, and the fear of illness and death.” When it comes to health, human beings are evolutionarily designed to rely on the thinking, recommending, and actions of others.

This is partly the reason of why false information about Covid-19 is spreading so swiftly, Kessler explains to CORRECTIV. “If the information that you read about the coronavirus is also plausible and fits into your own world view, it is stored directly in your mind. Once a piece of fake news gets into someone’s mind, it is anchored there in a relatively stable manner and it is exceedingly difficult to remove.”

What are technology companies doing about this?

Youtube, Whatsapp, and Facebook don’t remain idle when faced with these issues. They are already taking measures to limit the spread of false reports.

Thus, Whatsapp has, since early April, restricted the forwarding of messages, which can now only be re-sent to a maximum of five chats. In addition, messages that have previously been forwarded five times can only be sent to one further chat. Upon request, Whatsapp informed us that this has reduced the amount of heavily forwarded messages by 70 percent.

Whatsapp also emphasizes that they support the work of fact checkers worldwide, as well as working with public authorities. In fact, users have recently been able to communicate with the WHO or the German Federal Ministry of Health on the subject of Covid-19 via a Whatsapp chatbot.

The Facebook company, which owns Whatsapp, has been cooperating with independent fact checkers like CORRECTIV for several years. As a result, people who have shared incorrect information on the social network are, also retrospectively, informed about this fact. In addition, Facebook states that posts about the coronavirus “that could pose an imminent threat to physical harm” are deleted on Facebook and Instagram.

Youtube has no fact-checking program yet. The company removes videos with false medical information about Covid-19. Youtube spokesman Georg Nolte informed us by email that an example for this would be videos that claim that the coronavirus doesn’t exist. Or that recommend “medically unsubstantiated methods” to avoid infection and prevent people from getting treatment. He also states that videos “explicitly denying the effectiveness of the guidelines of the WHO or the respective health authority, which could lead to people violating these guidelines” are deleted.

“We are working at full blast to protect our users from misinformation and want to connect them to reliable and helpful messages,” says Nolte. In consultation with the German Federal Ministry of Health, info boxes were installed under the relevant videos, on the homepage, and in the search feature on Youtube. “We want to draw the attention of as many people as possible to the information panels of the Ministry and the related institutes. From a global perspective, we have already generated 14 billion impressions on the information pages of the various health organizations.”

In Germany, Youtube has, for some time now, actually displayed a link to the Federal Centre for Health Education (BZgA) in videos on Covid-19.

But is this enough? Some videos are not deleted because it isn’t evident that they meet the criteria mentioned. They usually have a lot of opinion content – and they are often misleading. An example of this is a 30-minute post by blogger Ken Jebsen, in which he makes several false claims and speculates that Bill Gates has taken control of healthcare in order to push through a forced administration of vaccines. Numerous readers have referred us to this KenFM Youtube video, with, by now, more than three million views.

A video interview with Stefan Homburg, in which he claims that the government’s lockdown was unnecessary and ineffective, is also still online, although in the introduction moderator Milena Preradovic urges all viewers to please adhere to regulations regarding the coronavirus. On the other hand, it is, for example, no longer possible to find a video that places the statements of an Italian doctor on the coronavirus into the wrong context.

Chain letters on Whatsapp or videos on Youtube often reach extremely wide coverage before the first fact checks or media reports on them are published. And Youtube’s reference to the Federal Centre for Health Education, which is also displayed below Ken Jebsen‘s video, can be misleading under certain circumstances. Users who don’t know the background might actually consider it an indication of the seriousness of the claims therein.

According to an assessment by communication scientist Kessler, Youtube tries to counter false reports and agitation, but: “Youtube will only be able to chase the fake news disseminators unless fundamentally new measures are taken.”

Another problem is that big companies release few data for scientific studies. “Both Youtube and Whatsapp are difficult to study for the field of social science research,” says Kessler. Nobody knows exactly what the extent of the false reports about the coronavirus look like on there.

Videos by Bodo Schiffmann, a doctor who operates a clinic for diseases like vertigo in Sinsheim, were submitted to us 131 times. He opposes the government’s coronavirus measures and recently even founded a party: „Widerstand2020” (“Resistance 2020”). As if by assembly line, Schiffmann has been producing videos on the coronavirus for weeks. His videos are full of speculation – something reflected by the frequency with which readers submitted them to the CrowdNewsroom.

Videos from the Youtube channel “eingeSCHENKt.tv” were reported 73 times. Journalist Thomas Schenk is behind this channel, with 85,000 subscribers, and posts that are more political than scientific in nature. Previous to the coronavirus crisis, videos with titles such as “CO2 und Klima(lüge)?” (“CO2 and climate [lie]?”) were published there, as well as interviews with Max Otte from the Values Union of the CDU, or the right-wing Youtuber Heiko Schrang. Currently, the channel frequently reports on the so-called hygiene demos.

Sucharit Bhakdi is Professor Emeritus of Medical Microbiology and Hygiene at the University of Mainz. Links to his videos were sent to us by users 43 times. His Youtube channel was created just a few weeks ago and has around 71,000 subscribers – but some of his videos record one to two million views.

“KenFM” is the Youtube channel of blogger Ken Jebsen and counts 466,000 subscribers. In his videos, he generally downplays the dangerousness of the coronavirus and expresses suspicion about a big conspiracy behind the pandemic, including, among others, Bill Gates as puppet master. KenFM’s posts were sent to the CrowdNewsroom 34 times.

Videos from “PUNKT.Preradovic”, the Youtube channel of the former RTL presenter Milena Preradovic, with 37,000 subscribers, were reported 33 times. Among others, she interviewed Sucharit Bhakdi, who claimed that vaccinations against the coronavirus are “senseless”; economist Stefan Homburg, who considered the lockdown as unnecessary and superfluous; and physician Wolfgang Wodarg, who questioned the dangerousness of the coronavirus.