Facebook and Youtube are the platforms where potential misinformation was spread most in 2020. This is shown by an analysis of user data by CORRECTIV.Faktencheck’s CrowdNewsroom.

In mid-March 2020, Germany – like many other countries – was overwhelmed by a wave of disinformation about the coronavirus pandemic. In response, we created the CrowdNewsroom – a method to allow readers to send us pointers online. At the same time, we ask them for further details; for example, where they came across the questionable information.

An initial analysis of the data in May showed that, at that time, users mainly found questionable information about Covid-19 on Youtube, and that it was disseminated via the Whatsapp messaging service. However, a second analysis of all data received up to December, shows a somewhat different picture.

Around 4,000 reports submitted by our readers

From March to December 2020, our CrowdNewsroom received around 4,000 pointers from all over Germany. During this period, Facebook became more relevant in spreading potential misinformation. Despite the fact that surveys show that compared to other platforms, this social network was used less in Germany than in 2019.

Our data is not representative. Distortions are possible – among other reasons because, theoretically, the same person can submit dozens of articles to the CrowdNewsroom. Above all, the analysis shows which platforms are used by the readers of CORRECTIV.Faktencheck. The reports are also based on people’s subjective assessment of what information could be false. Thus, not all submissions are necessarily fake information.

However, the reports can give an insight into trends; for example, where on the Internet people are confronted with information that they consider questionable.

In May, we updated the CrowdNewsroom and opened it up for all other topics except COVID-19. Unsurprisingly, the coronavirus continued to dominate: almost 60% of the submissions since May dealt with the virus and the pandemic. “Politics” (around 22.1%) occupied the second place, while “Health/Medicine” (around 6.9%) came third. Vaccination has become more relevant, especially since the end of December; a separate assessment of this could be valuable for the future. 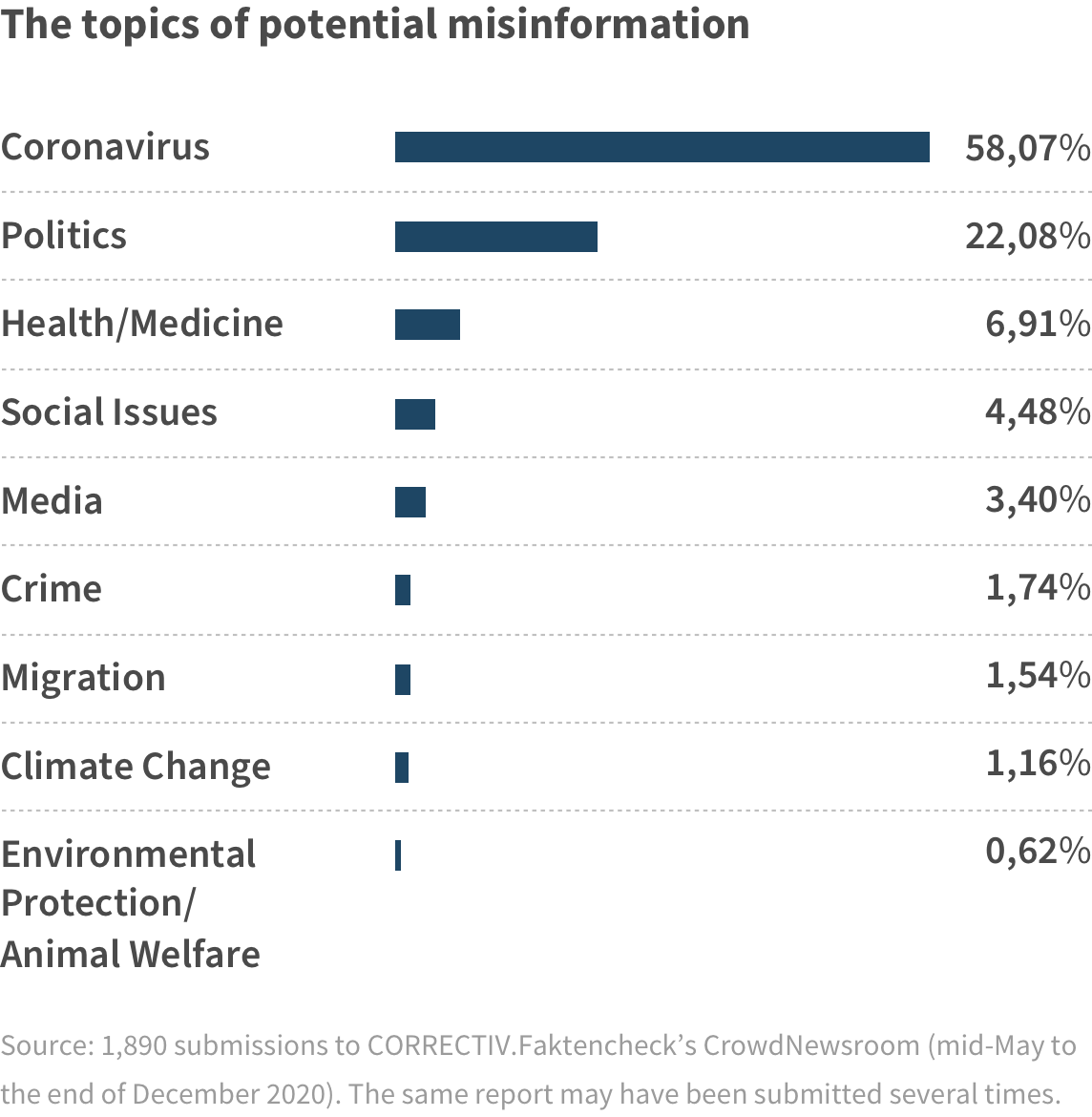 The data from the CrowdNewsroom is anonymous. Since May, however, it has been possible to voluntarily provide the postcode of one’s place of residence. Users provided us with this information in around 1,000 cases. Thus, we were able to assign the reports to federal states. The analysis shows that people all over Germany used our service to send us tips last year.

However, it is remarkable that more than half of the 1,000 submissions come from Bavaria. One possible explanation is that a person or group in that area used the CrowdNewsroom frequently, as the same Bavarian postcode came up noticeably often.

If the population of the federal states is taken into account, most reports in the CrowdNewsroom came from Bavaria, Berlin, and Hamburg. The least frequent came from Lower Saxony and Saxony-Anhalt.

When we first evaluated the data in May, Whatsapp still played the biggest role in spreading potential misinformation. However, if we consider the period up to December, Facebook lies ahead.

When asked where they came across the information for the first time, around 42.3% of the users answered with Facebook. In second place was Whatsapp, with around 20.9%. Finally, 14.5% of the users said that their first point of contact was a “website,” with around 10% of them mentioning Youtube.

Twitter and Telegram play a smaller role: around 3.5% of users of the CrowdNewsroom indicated that they discovered the information in a tweet. For 2.2% it was via Telegram. Instagram was named by less than 1% of users. 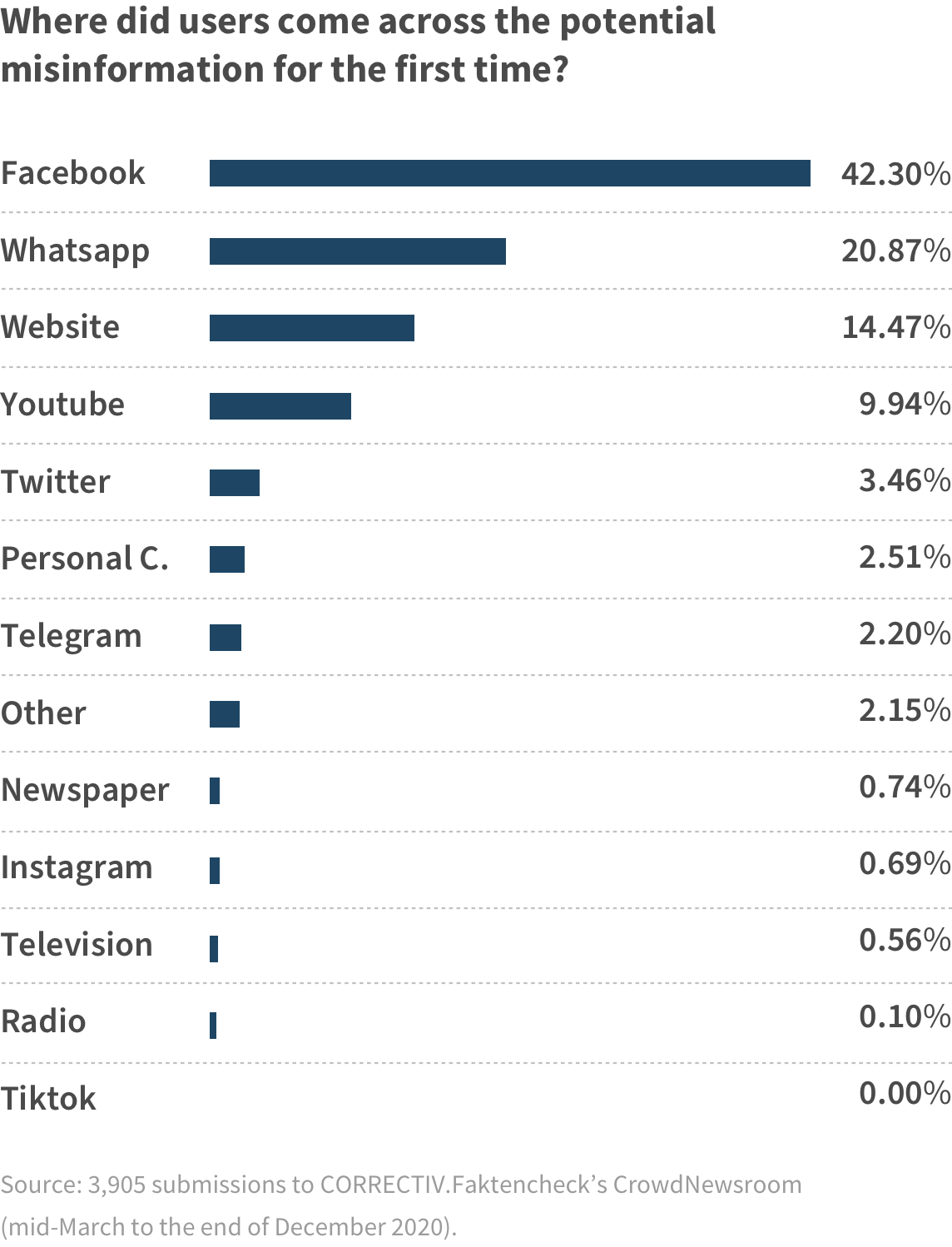 The fact that Telegram is so rarely mentioned is a sign that there are specific user groups for each social network. Research by CORRECTIV.Faktencheck in 2020 has shown that especially those who downplay the coronavirus pandemic are very active on Telegram. Some people go there on purpose to avoid alleged “censorship” on platforms such as Facebook and Youtube.

According to reports from other media such as ZDF or T-Online, the messaging service experienced a boom on account of the coronavirus pandemic. Scientists from the University of Greifswald analysed 913 groups and channels on Telegram over the past year and found that its users might move “easily from a discussion on current topics to disinforming and conspiracy theoretical content in extremist contexts.” Further, “actors who are suspicious to hostile towards the German media system and the state are strongly represented” there.

Thus, Telegram plays a bigger role in spreading misinformation than our data analysis suggests. In other words: people who use our CrowdNewsroom are presumably not part of the audience participating in relevant Telegram chats.

We also always ask users of the CrowdNewsroom to provide us with a link to the questionable article or social media post. From March to December 2020, we received more than 3,400 links. An analysis of the URLs shows that around 41% led to diverse websites. Thus, reports from various media or blogs play a major role. Their links are disseminated via social networks, especially through Facebook and Whatsapp.

Videos on Youtube slide into second place, with around 32.4%. In our first data analysis in May, Youtube was still at the top, with 45%.

In third place is Facebook, with around 22.6%. This social network has gained in importance here: In our first data analysis, Facebook posts accounted for 16.6% of the links submitted. 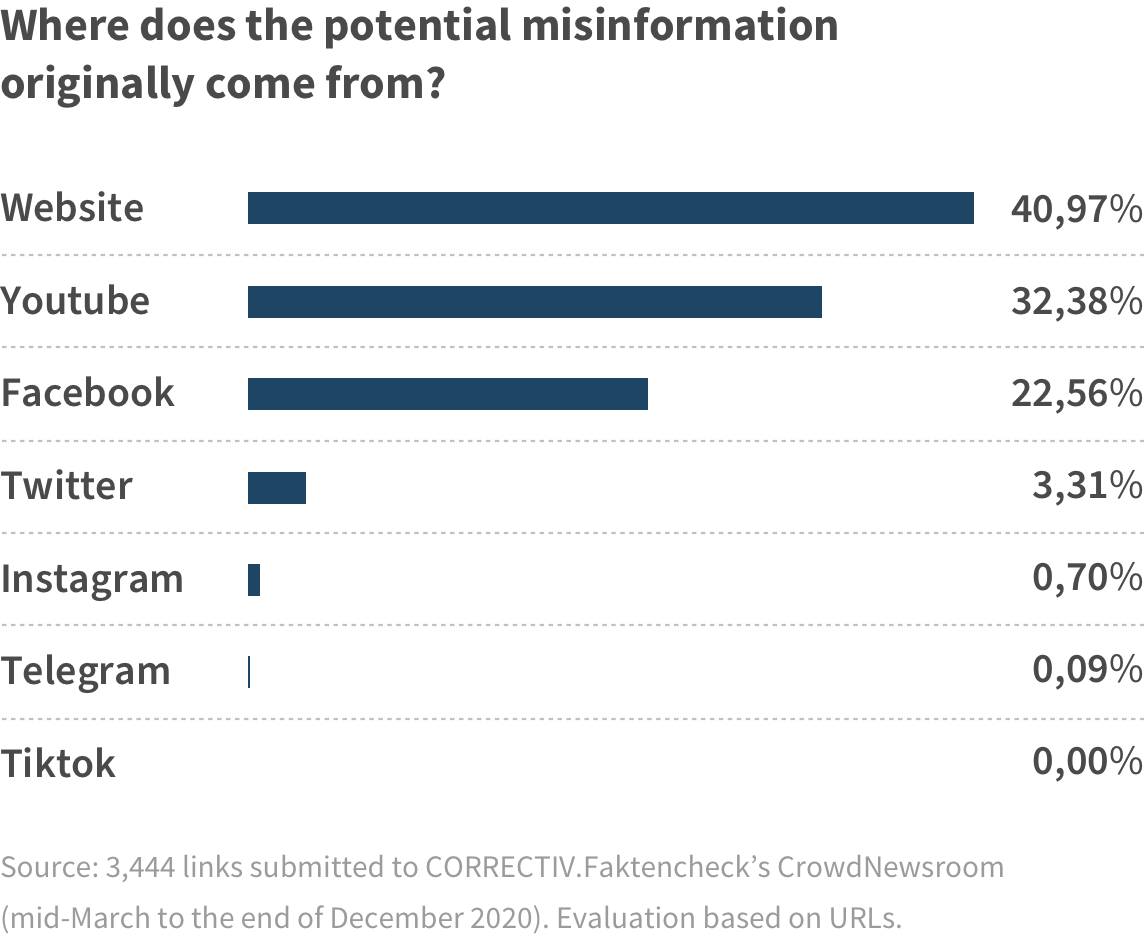 How should the results be interpreted? Facebook’s relevance can be explained in part by its massive number of users. However, this social network has been losing significance for some time. According to an ARD-ZDF online study, Instagram replaced Facebook as the most popular social network in Germany in 2020: “15% of the population use Instagram daily (2019 = 13%); Facebook, on the other hand, only comes to 14% and therefore decreases clearly compared to the previous year (2019 = 21%).”

According to this study, Whatsapp clearly lies ahead in a comparison of all social media applications: 68% of the German population use it daily. When comparing the video streaming services, Youtube is at the top: 43% of the respondents stated that they use Youtube at least once a week.

To a great extent, our CrowdNewsroom’s analysis reflects media usage in Germany. However, there are also contradictions: platforms like Instagram and Telegram are becoming increasingly popular, but our data does not show this so clearly. However, their role in spreading disinformation should not be underestimated.